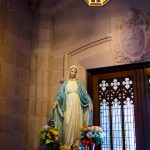 I’ve been to a lot of kid birthday parties.  I’ll be honest, they’re usually not that fun.  All the adults who have yet to procreate, form an isolated group, and we wonder when is an appropriate time to leave without being rude.  There’s never enough food.  And typically, there isn’t any alcohol.  Even at church functions I go to, there’s alcohol involved!  Props to St. Dominic’s for bringing bottles of wine and beer to almost all of the wedding classes.

We went to the best kiddy birthday party today to celebrate two twins’ 2nd birthday. I’d even count it as one of the best birthday parties (adults and kids combined) I’ve ever gone to.  We left the city (it seems like you have to leave the city these days to have a good time–I’m so bored with San Francisco) for Pastorino Farm in Half Moon Bay.

I kept asking Dean, “There’s going to be food, right?  You know how I get when parties run out of food.  Totally lame.”

We drove into this sunny wonderland and there were kids hanging out at the petting zoo.  There was one of those giant castle bouncy contraptions.  A choo-choo train gave rides around the farm.  Woo-hoo!

For the adults?  A bar that was manned by a professional bartender greeting everyone with margaritas.  Oh yeah.  Bring it!  The parents of the twins had the party catered. Dosas were grilled by chefs to your liking with potatoes, onions, tomatoes, peppers…you name it.  I’m not kidding, I had four platefuls of Indian food and I continued to snack and drink to my heart’s delight until we left at 4:30pm.  That’s when the shots got going.

Who stays at a children’s birthday party for five hours?  People who are having a good time.  That’s right.  People who are well-fed and well-liquidated.  Keep that in mind for all of you who are planning that next toddler party.  It’s not just about the midgets (Yes, I know I’m a midget), but it’s also about your friends–the adults.  Remember us?