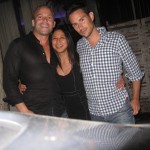 My boss copied me on an email to a client and this was the response that came back from him.

“Is that the one and only Catherine Gacad from Chicago GSB/Booth 2004?”

Now I make this point again, because there seems to be so much controversy around keeping a name or changing a name.  So much so that it was the most debated topic of conversation during our Engagement Encounter weekend.

If I’m no longer Catherine Gacad, how would anyone out there who has gone to school with me, worked with me, or otherwise interacted with me in some capacity know that I’m THE Catherine Gacad.  Like pretty much the only Catherine Gacad in the U.S. and one of only two or possibly three in the universe?