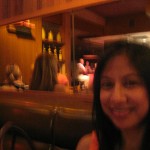 Dean is in San Diego for his bachelor weekend.  Timed perfectly because I needed this weekend to adjust.  I woke up at 5:30am. Couldn’t go back to sleep.  Whittled through email and other online tasks until 8am, then went back to bed until about 10:30am. Phone calls from friends and Dean woke me up.  Got my bi-monthly mani-pedi.  Strolled down Chestnut Street.  I told myself I was only window shopping.  I needed nothing, except the dress that I had to have!  At least I passed on the beaded glass necklace.

Hanging out by myself for a weekend reminds me what it was like to be single.  Lots of alone time.  I read more back then.  I drank a lot more, too.  I had less disposable income.  I was paying a mortgage, student loans, every single PG&E, wireless, garbage, and restaurant bill.  It’s easier financially when you’re partnered up.  Dean pays the rent and the bills.  I still pay all my other stuff, but the rental income goes into a savings account.

Single people also hate good news.  Shit, another friend got engaged.  One less person to hang out with.  Fuck, that cool friend is preggers.  There go our ritual happy hours. I’ll admit I was totally one of those people.  You see your clique of single friends getting smaller and smaller, and you feel so alone–even more alone than you already feel because you are, in fact, alone.

But being single was also very liberating.  You could hang out with whomever, whenever you wanted.  As long as you both understood the rules.  No getting emotional.  Certainly no hanging out during the day.  I remember a guy hanging around in the morning.  “Ummm, well, I’m going to take a shower.  You don’t have to lock the door on your way out.  It locks automatically.” HINT-HINT.  Then when I got out of the shower, he was still there, sitting on my couch, waving hello as if for the first time.

Dating had its ups and downs, depending on your mood or the time of the month. When I griped about being single, a friend comforted, “You can be like CoCo Chanel. She never married, but had a string of lovers.”

I know the pros and cons of being single well since I lived that life for a long time. There’s always a silver lining to the cloud which is that I did whatever I wanted, I travelled around the world, I kept to my own schedule, I didn’t have to report to anybody. And I think more people read my blog back then!