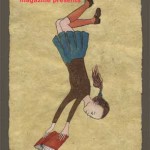 I’m a huge fan of Writers with Drinks which, in my opinion, is the best literary series in San Francisco.  The monthly event in the Mission is packed and star-studded (popular, famous writers).  All the seats are taken twenty minutes prior to showtime.  I like to go to artsy stuff like readings and lectures alone because I kinda have an eclectic taste which I don’t like forcing on anyone, but Dean wanted to come along.  I didn’t mind because Writers with Drinks is so good that I was sure he’d like it.  “You’re going to love it.  It’s one of my favorite events.  They get the best writers.  Next month, they have a Pulitzer-prize winning author.”

I had to eat my words.  I was so embarrassed, I kept shaking my head throughout the evening, mumbling, “I’m so sorry.  This is really bad.”

It wasn’t just bad.  It was disastrous.  The first person who read was a white-haired lesbian probably in her fifties with glasses. The host introduced her as a comedian.  But no one laughed at all.  Even Dean said, “Well, you gotta start somewhere, right?”

She was so bad that she kicked herself off the stage.  She ended with, “My time’s up, right?”  Then she walked off.

The host introduced the second one as a popular blogger.  Despite her gorgeous curly red hair, the middle-aged woman looked like a frumpy chubster with librarian glasses. Her reading was about a 24-hour sexcapade with her ‘mate (i.e, roommate) and next-door neighbor.  Dean and I are still perplexed as to what happened, but mid-way through her reading, it’s as if she couldn’t read.  She slowed to one word every few seconds–like a second-grader.  She wasn’t nervous.  She continued, holding her notes right in front of her.  Dean thought it was part-performance art.  The audience nervously looked around.  People started having side conversations because it was so bad.  She was so bad!  Yet she kept reading.  “Sucked….cock….Then…we…started….”

The host went up to the stage and started inching toward her.  The host was trying to find an appropriate break in her reading to harangue her off the stage.  Enough was enough.  At the end of a sentence, the whole audience started clapping and the host pointed to her wrist.  ‘Time,’ she mouthed.

It gets better.  The blogger didn’t want to leave the stage.  She pointed to her notes and mouthed back, ‘Not done.’  The audience clapped even louder.  I laughed.  It was hilarious.  The host said, “Sorry, we have to move on.”  The host grabbed the mike and smiled, “Thank you.  Let’s hear it for Shazam.”  Yes, that was her name.