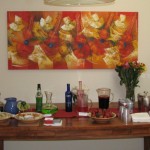 Today is my first day on an anti-depressant.  First day ever.

Take 1 tablet orally 2 times a day.  150mg in the morning.  150mg eight hours later.  The ingredients and timing seem so calculated—the same way my life was calculated: elementary school, college, business school, work, and throw in several solid international vacations.  I could have plotted my life on a Mead’s spiral-bound notebook.

Yet the decision to go on Wellbutrin was not a calculated one.  It’s like it whispered to me.

I’m not one of those people who’s scared to take medication.  I’ll take aspirin, Sudafed, Nyquil, Ambien, and wash it down with a glass of wine.  Once I called the advice nurse and made him promise I wouldn’t end up like Heath Ledger.  He chuckled.  No, of course not.  It’s fine to take all the meds you mentioned.

Taking the medication wasn’t the problem.  The question is when to stop.  With the cold and flu, you end the drugs when you’re better.  With Ambien, I don’t take it every night so that doesn’t concern me.  With an anti-depressant, how do you know when to stop?  When I posed that question to the psychiatrist, he said, “Given what you’ve told me, you’d have to be on indefinitely.”  Being on a medication forever seems like a scary prospect for me.  So I never went on.

Until a good friend of mine publicly proclaimed the benefits of Wellbutrin, “Changed my life.”  You don’t hear those words often.  I remember several years ago, a friend told me that Botox cured her severe sweating problem.  She had said it changed her life.  Really?  You mean I don’t have to sweat through my blouses at work anymore?  Underarm sweating had caused me a lifetime of embarrassment.  I signed up eagerly for the 15-20 injections in each armpit.  Good-bye sweating.  Good-bye deodorant.  Botox changed my life, too.

A couple weeks ago, I had lunch with a coworker.  It had been a while since we hung out and it was time to catch up.  But it didn’t turn out to be a surface-level catch up lunch.  We delved into relationships.  He confided about his broken engagement.  I described to him what made my relationship different from others.  Then I don’t know how it slipped in, but he said, “I’m lucky I found Wellbutrin.  I’ve tried anti-depressants before, but this one really works for me.”

Ever since I was a little kid, I could cry my little heart out.  I thought I’d grow out of it.  I thought it was an adolescent thing, or the pressure of Berkeley, or uprooting myself for Chicago.  I thought it was the weather.  Maybe it was the emotional roller coaster of dating.  Then you find someone to love who loves you back, but you’re still crying.  I realized I never outgrew it.  Maybe this can help.