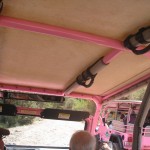 When I think of real world education, I think of religion class in high school when we were given our “lot” in life.  I was a single girl living in the Bay Area.  Our assignment was to figure out what to do and live within a budget.  I decided to waitress.  I figured I’d make good tips.  I wanted to live without roommates so I stayed in Alameda and found a studio apartment by the beach.  We had to put together a detailed budget that proved that we could live within our means.  It seemed a dumb project at the time, but sensible in retrospect.  The class ended with a fake wedding at church.  We had a mass and our religion teacher pretended to be the presiding priest.  Ironically, two of the people who are in my bridal party were the ones who got married.  And I was one of the bridesmaids in this fake wedding.  We have come full circle, people!

I also remember picking a stock in Geometry class and tracking it in the newspaper.  I was the laughing stock of class because I picked the worst-performing stock.  If I’d held onto it, I would have been rich.  It was Genentech!

It makes me wonder what we teach our children these days.  Are teachers so focused on a curriculum–math, biology, literature?  Who teaches our kids that you should always pay your full credit card balance every month?  Are there green campaigns in school?  Reduce, reuse, recycle.  Is this the job of parents?

My parents honed in on these things growing up: don’t ever bring home anything less than an A on your report card, work hard, study hard, don’t date (no guy wanted to date me even if my parents would have allowed it), go to church every Sunday, and pray.  I think my parents did a really good job, especially considering they immigrated here.  I’m sure a lot of their disciplinary parenting will work their way into my own parenting.

My English professor in college said that she raised her kids to know that they could do whatever they wanted to do in life.  She wouldn’t get in the way.  At the end of the semester, she said she might have to eat her words because her son wanted to defer Harvard; he wanted to take at least a year break after high school.  She flipped out.

I know it’s not possible, but I want to be really zen about parenting.  I don’t want to be one of those parents who’s always running around chasing their kids, making sure they’re ok.  Let them run, let them skid their knees, let them learn.  Give them the tools early on to be independent and make smart choices.  Easier said than done.

I’m on a personal campaign to convince parents not to spend a single cent on their kids past their high school graduation date.  Typically, most parents pay for their kids to go to college. But what if one of your kids (let’s say your youngest) said he didn’t want to go to college, that instead he wanted to pursue an acting career and wanted you to support him for the next four years like you did for his siblings’ college tuition.  What would you do?  Are you going to deny him the money because it’s not what you want him to do?

This is where it’s time for kids to make their own choices.  If they really want to go to college, they’ll take out loans and finance it.  If they want to be a starving actor and wait tables, then that’s ok too.  It’s their life.