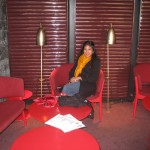 Eliot Spitzer, John Edwards, Tiger Woods, Jesse James.  Is society telling us to remain faithful, but it’s not in our human nature? I think cheating is pretty disgusting, but I’m also a conservative American.  Can you imagine living in France or Russia where mistresses are common place? And a slew of other countries, including my homeland? When my Thai friend got married, she had to invite ALL her aunts–meaning the mistresses, too.  Then she had to figure out where to seat everyone to keep the peace. Damn, can you imagine figuring out those table assignments?  Mine will be hard enough and my extended family is a bunch of nuclear units!

At Burning Man, I met an interesting person.  He was a total brainiac and not just in the school of life sense.  He actually went to the top schools.  Think: the very best. He invited me to his RV to meet his wife.  I didn’t realize his intent was a threesome. They were poly.  Polyamorous which is distinct from polygamous.  His wife (who also had a similar academic background) confided in me that she hated it.  It destroyed her that her husband was carrying on with other women, but that she loved him unconditionally and they had kids.  So what was she going to do, leave?  I thought she was going to start crying, but then she got up and shook it off, “I made pasta for dinner.  Would you like some?”

In my mind, that is what always makes cheating wrong.  Because one always feels slighted, passed over.  That same one is always there when the other goes on his cheating ways.  No matter how you spin it, it’s cheating.  Poly bullshit.  Women need to stand up for themselves and not cave in.  No more apologies.  Pack your bags and let him know where he can send the check.