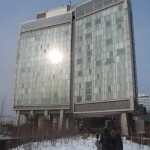 We have been in Palm Springs since Thursday, trying to finalize details for the wedding.  I’ve got my Excel spreadsheet and To Do List that I’ve been carting around. We’ve accomplished a lot.  I don’t think another visit is necessary, but if so, I’ll just come down one last time before the big day.  To save money, we stayed at the Motel 6 next door to our wedding site the Ace Hotel.  The Motel 6 is clean, convenient, so cheap, and perfectly acceptable.  I’m glad we’re able to recommend a budget hotel option for our guests. After spending $50/night at the motel, we splurged last night on the Viceroy.  It was actually all part of my master plan because I wanted to watch the Oscars in the comfort of a nice hotel.  I also found a deal at the Viceroy for $150, plus the front desk was kind enough to do an upgrade.

Mo’Nique deserved her award.  I think her performance in Precious was epic.  That said, I was a little shocked that she started out her speech saying she was glad that the Academy decided to award performance over politics.  Really?  I mean, her performance was a given.  Why did she have to taint her speech like that.

Jeff Bridges was fantastic in Crazy Heart.  I’m glad I got to see that movie even though it dragged.  He was certainly deserving and it was great to see someone of his caliber and acting heritage have a stable marriage and family life.  Right?

I really liked how they introduced the best actress and best actor awards with fellow colleagues talking about their work.  That was a nice, personal touch.  Good job to whoever made that creative decision.

Sandra Bullock’s speech was perfect, recognizing all mothers, her mother, and the other nominees.  That was awesome.  I also really liked Oprah’s introduction for Gabby Sidibe.

The theme song from Crazy Heart which won best original song is so beautiful.  Go out and get it.

As for the co-hosts, ummmm, they were alright.  I like having more than one person hosting, but they were just ok.  Overall, it was a mediocre ceremony.  Good job on keeping it close to three hours.

As for the movie that swept it all, I guess I need to see The Hurt Locker.