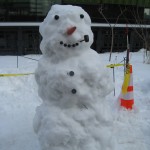 My bonus made its way into my checking account this morning.  I’ve been refreshing my online banking browser since late last night and went to sleep wondering.  I woke up happy.

I know what a lot of you are thinking.  ‘What is that bitch doing getting a bonus given the maelstrom with the government bailout?’

As Obama tersely demanded, “We want our money back and we’re going to get it.”

I want to point out a few things.  1) The government money was forced into the hands of healthy banks.  FORCED.  If you don’t believe it, read Andrew Sorkin’s book Too Big to Fail or any Vanity Fair article with Henry Paulson’s name in it.  2) The government (and taxpayers) received a generous 5% interest on their forced loan.  3) Never in my life when I’ve worked a full-time job have I not received a big bonus.

I want to elaborate on that last point.  I hear people tell me that I only receive a bonus because of the industry I’m in.  That is total bullshit.  Since I was 22 years old, I’ve received at least a 20% annual bonus.  I’ve worked in consulting.  I’ve worked for a startup. Shit, I worked for Cisco for a summer internship and even then, I got paid out a bonus!  It’s a significant component of my compensation. And you know what?  It is damn well expected.  I expect to be compensated for my performance.  When my coworkers have to leave to pickup their kids, I am there to pickup the slack.  When I’m one of the few people who lives in the city and a few blocks away from work, guess who comes in when there’s an emergency.  I deserve that bonus and it is never enough for all of the hard work I put in.

I’m not at liberty to disclose, but I am extremely proud to work for the company that I do.  When we don’t turn a profit, our executives don’t get bonuses as was the case a year ago.  There are criteria that must be met in order for them to obtain more than their salary.  Even then, their bonuses are mainly stock-based and vest after a period of time.  In other words, if the company doesn’t perform, they don’t get paid.  It’s very simple.  You won’t find that at most publicly-traded companies.