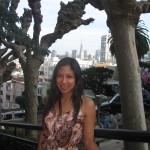 I was really skeptical that my red-eye flight to NYC was on-time.  OK, sure, whatever Virgin.

Well it was right on time.  We left at 11:15pm from SFO and headed for JFK.  I dozed off and on.  Everyone woke up when the pilot announced that we were heading to DC instead because of the snow in NYC.  There was a big groan.

DC?  I started immediately thinking of the friends I know in DC.  A handful of business school friends and a former coworker.

Then the pilot said, “I’ve got some good news.  Visibility cleared and we’re heading to NYC.  We’re starting our descent now.” Everyone cheered.  Two hours delayed, but I’m here in NYC.

This place is a winter wonderland.  Lots of places closed due to inclement weather.  My rude taxi driver wouldn’t even get out of the car to help me with my luggage!  I’ve been looking out my friend’s window and the scene changes from snow to blizzard to snow flurries.  I like watching it because I’m inside, but now sure how I’ll feel when I get back out there.