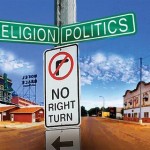 My largest grievance about the Bay Area is this: it’s full of a bunch of hypocrites.  People who reside here portend to be open, liberal, accepting.  Mark my words, the same people who believe this will shout obscenities as soon as they see the word ‘Republican.’ It is a disgrace.  All those hippy-loving Californians will turn on you as soon as they learn that 1) You’re a Republican, 2) You’re religious, or 3) You work for a corporation.  Get ready for the fires of hell if you voted for McCain, go to church, and work for Walmart.  Holy fucking shit, these people are hypocrites.

It all started with the race to fill the Massachusetts seat vacated by Senator Ted Kennedy.  Don’t get me wrong.  I love me those womanizing Kennedys.  But I do not want to see a political dictatorship.  That’s what filling the seat with another Democrat would have done.  ONE-SIDED POLITICAL DICTATORSHIP.

Let me come clean.  I grew up in a very democratic, immigrant household.  My dad pounded signs for Mondale and Ferraro on our front lawn.  Notwithstanding, I politically leaned conservative.  I still do.  As my best friend likes to say, “Cath, you know you’re really just a conservative Democrat.”  What I really am is a Libertarian.  But that’s beside the point.  The point is, I vote the way I want to vote.  I am not aligned to a political party.  I was a Republican.  I switched to campaign fervently for Hillary Clinton.  I voted for Obama.  But I did not want to see Democrat Martha Coakley win the election.  Why?  For one, she’s a fool.  She ran a complacent campaign and lost dearly.  Two, if I wanted to be ruled by a government controlled by one party, I’d move to communist China.  What?  No Facebook, no Google?  How about North Korea then?!  Whaddup Kim Jong—you be illin.

I posted the following on my Facebook wall “As a capitalist, I am rooting for the Republican to replace Senator Kennedy’s seat,” and you can imagine the maelstrom I instigated.  Brutal messages insued offset by some messages of support.

In retrospect, I should be proud of the overwhelming response I received.  Wooohooey!  But towards the end, it became deconstructive.  That’s when you gotta say, stop.  Let’s agree to disagree.  The voters have spoken.  Let’s move forward.