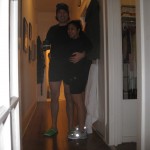 I’m a fanatical planner.  I love calendars, lists, and notebooks.  Intuitive Excel spreadsheets give me orgasms. But I can also be very rash.  Like the time I insisted on spending the night with an African tribe by myself.  Or the time I ran the Bay to Breakers buck naked.  I intersperse my planned life with these random jolts.

The other day, I decided to sign up for a half marathon.  I’m lazy.  I don’t exercise.  I’m the vending machine’s best customer.  But I hit ‘submit’ on the registration form and credit card payment with less than three weeks to train.  I’m hearing a whole spectrum of commentary from friends. “You can do it.”  “Pain is weakness leaving your body.”  “Remember runner’s high.” Then there are those who say I haven’t planned enough time to train.  This is the time I should be ramping down when clearly I’m ramping my lazy ass up.

You know what?  Now, I don’t want to do that again.  I tried again today.  I got 30 minutes in, then stopped.  I’m done.  I’m over it. I’m tired of the pain.  I don’t think I’m going to run more than 5 miles except when the gun goes off on Superbowl race day. Risky?  I don’t know.  I ran my first (Chicago) marathon having trained up to 7 miles. That was it.  I quit after 7 miles, decided to pass on the race, then got egged on by fellow business school friends.  “Come on.  You signed up and paid.  And you’re not going to run?  It’s the Chicago marathon!”

Well shoot me because I was there on race day and I ran for more than four hours straight.  I finished my first marathon in four-and-a-half hours.

It’s all mental and honestly, I’m not sure training really helps.