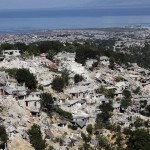 I’ve been busy at work, no time for the daily escapades through Twitter, the NY Times, SF Gate.  I made a point to checkout the video clips on CNN.com of Haiti, then Anderson Cooper last night.  I continued watching the destruction this morning while running at the gym.  I only began realizing the impact when watching video footage of a helicopter panning Port-au-Prince. Buildings were razed.  One airport.  One port.  Even those limited entryways into the country are destroyed.  There are hundreds of people texting from beneath the rubble.  They’re trapped alive.  It’s chaos.  They can’t get the help they need.  Doctors without Borders who were treating patients in a makeshift tented operating room had to leave for safety reasons.  Dr. Sanjay Gupta spoke of his frustration.  The doctors were being told to get on a bus and evacuate.  There were patients that had just been operated on that they were leaving behind.

I want to help, but I’m not sure throwing money at the problem right now will help. When the time is right, I will donate to the ClintonBushHaitiFund.org which will ensure that 99% of the funds will go to relief efforts, specifically private investors who will help to build Haiti in the aftermath.  I applaud Secretary of Homeland Security, Janet Napolitano, who granted temporary permanent status to Haitians living in the U.S. Finally, someone who is actually thinking of solutions with a direct, positive impact! Haitians in the U.S. can now remit money back to family and friends in their homeland. Let’s keep thinking of similar solutions.